Like no other place in the world, this remarkable South American country is endowed with archaeological and cultural riches, and complete with natural wonders in every form imaginable: mountain, lake, ocean, river and rainforest. Peru’s capital and international gateway city, Lima is the first, unforgettable taste of Peru for most travelers.


Founded in 1535 Spanish conquistador Francisco Pizarro, Lima stretches for miles and miles along South America’s stunningly picturesque Pacific coast. This is a culturally and socially vibrant metropolis adorned with majestic colonial-era plazas and elegant architecture that serve as a poetic preamble to the city’s excellent museums and a local cuisine that is growing in reputation by the minute.

In the impressive museums of Lima, a wealth of ancient art and artefacts from the pre-Incan to the colonial and contemporary give inbound tourists a teaser of what to expect from the country. Many of Lima’s museums, such as the 18th century mansion of Museo Larco and the neoclassical structure of Museo de la Inquisicion, are themselves architectural works of art.

Lima is also increasingly known as the gastronomic capital of South America, occupying three spots on the highly-esteemed World’s Top 50 Restaurants 2018 list. Centuries of culinary history and agricultural know-how has perfected a cuisine that rivals the best in the world, but yet is still relatively unknown. So, whether it is hearty skewers or ceviche from street food stands or fine molecular cuisine from headline-grabbing restaurants, every meal in Lima has the potential to be a new and amazing discovery.

On board the Aria Amazon, guests can sample a brand of refined local cuisine with roots in the Peruvian Amazon, with a dining experience crafted by one of the the country’s preeminent culinarians, Pedro Miguel Schiaffino. Chef Pedro’s menu transforms the freshest produce and ingredients from the river and rainforest into a delightful medley of flavours.

Not to be outdone is the drinks department, with the pisco sour widely regarded as the national cocktail of Peru. Guests aboard the Aria Amazon will learn from our expert bartenders the history of the pisco sour and the secrets to mixing this Peruvian classic. Other than that, Lima also offers a series of top-notch bars where you can toast your trip with our national sip. 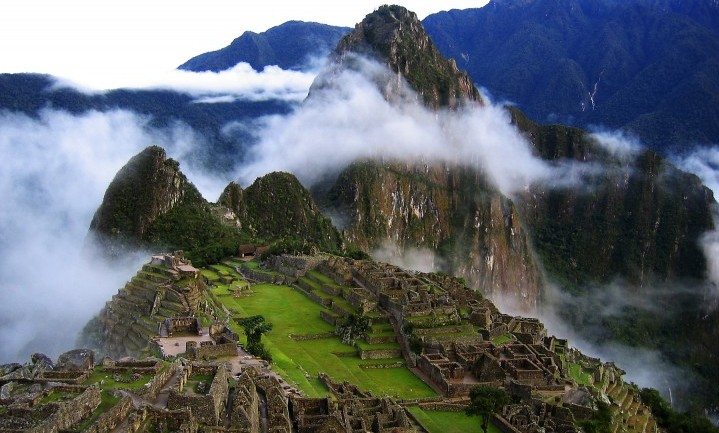 Built in the mid-15th century, this Inca citadel is one of the most astoundingly beautiful, fascinating and well-preserved ancient civilisation relics on Earth.


Framed by the spectacular peaks of the Andes mountains and in the middle of a cloud forest, Machu Picchu is the crowning glory of the ancient Inca empire. This stone citadel is easily accessed from the delightful old city of Cusco despite its location on a narrow ridgetop at 2,430 metres altitude.

Dating back to the 15th century, Machu Picchu was painstakingly built over 50 years. Believed to have served as the political, religious and administrative centre for the Incas util 1572, the ruins of Machu Picchu today intrigues with well-preserved evidence of ingenious design, ornamental work and elaborate ancient technology, such as its iconic farming terraces and irrigation systems that had enabled its people to survive despite its challenging location.

Strangely, Machu Picchu was not mentioned in any of the chronicles of the Spanish conquistadors. Nobody apart from local Quechua people knew of its existence, and with the fall of the Inca empire the citadel was nearly lost to the sands of time until it was rediscovered in 1911 by American archeologist Hiram Bingham. A UNESCO World Heritage Site since 1983, Machu Picchu and the surrounding ruins and ancient cities are today among the first must-dos for a traveler to Peru along with the Peruvian Amazon.

Machu Picchu is also part of the Inca Trail, arguably the most famous hike in the world. Starting from near Ollantaytambo and passing through numerous peaks and passes before ending at Machu Picchu, this is a 82km trek that takes four days and three nights to traverse. At 3,400 meters(11,150 feet) above sea level, the one-time southern capital of the Incas is more vibrant than ever.


Cusco is often used by travelers as the gateway to Machu Picchu, but has much more than its own fair share of highlights. Continuously populated since the 14th century, this remarkably-preserved Incan city offers visually stunning native Peruvian traditions in action that intersect with Peru’s Spanish colonial heritage. Festivals live large in Cusco, with the most important being the Inti Raymi ‘Festival of the Sun’ (June 24), when whole city celebrates on the streets with dances and parades.

While in Cusco, stroll charming cobblestone streets and discover art galleries, alpaca sweater vendors, handicraft shops and a stunning food scene thanks to its access to an unbelievable range of native crops. The city’s focal point is its surreal Spanish Baroque cathedral, which stands on the site of an Incan palace and features an altar made of pure silver. Meanwhile, the Museo de Arte Precolombino showcases a world-class collection of pre-Columbian art, and is just one of the many museums in the city that will delight history buffs.

Just outside Cusco, Qorikancha, or the Temple of the Sun, was once home to 4,000 Incan priests, and served both as an observatory and a storage facility for vast quantities of precious metals. Sacsayhuamán, one mile north of Cusco, is a military and religious complex dating to 15th century with sweeping views of Cusco itself. According to Inca legend, Sun God Inti ordered his children Manco Cápac and Mama Ocllo to rise from the waters of Lake Titicaca in Peru and establish the Inca civilization.


At 12,500 feet (3,800 meters), Lake Titicaca is the highest navigable waterbody in the world and is gloriously surrounded by even taller mountains link Peru and Bolivia. Visitors to the deep-blue lake arrive first in the quaint shore town of Puno, where Quechua and Aymará people go about their colorful daily lives in largely the same way their ancestors did generations ago.

The highlight of Lake Titicaca is undoubtedly Islas Uros, a group of 40 islands woven entirely from the buoyant totoya reeds that grow along the shore. A tribe of fishermen and their families have lived on these floating islands for centuries, constructing reed huts and getting around in iconic yellow reed boats. Further out on the island of Taquile, local Quechua people live among Inca ruins and go about their lives dressed in what’s considered some of the most well-made traditional garments in Peru. 
In the arid Peruvian coastal plain, some 400 kilometers (250 miles) south of Lima, living creatures, stylized plants and imaginary beings as well as geometric figures several kilometers long were scratched into the dry earth like ancient graffiti between 500 B.C. and A.D. 500.

The ‘Nazca Lines’ are, according to UNESCO, “the most outstanding group of geoglyphs anywhere in the world” and remain among archaeology’s greatest unsolved mysteries because of their quantity, nature, size and continuity. Some experts believe that these mysterious desert drawings may have been used for ritual astronomy.

The Nazca Lines were only spotted in the 1920s when Faucett, an early Peruvian airline, began flying from Lima to the southern Peruvian city of Arequipa. Flying over these inexplicable earth drawings remains the best way to appreciate their enigmatic beauty.

Overview
Begin your journey with us
Check Dates and Rates