When we think of the Amazon Rainforest, Brazil automatically comes to mind. Yet it is a little-known fact its birthplace is actually the Peruvian region of the Amazon river and rainforest. This section of the Amazon is the most untouched, bearing a large concentration of wildlife and flora in the vast protected area of Pacaya-Samiria National Reserve.

A Brief Background of the Amazon Rainforest

The Amazon is the worlds largest rainforest with a surface of 550 million hectares and is also known as the single largest reserve of biological resources on land. With such an extensive reach, the incredible ecology of the South American Amazon river stretches across nine countries of the continent: Brazil, Bolivia, Peru, Ecuador, Colombia, Venezuela, Guyana, Suriname, and French Guiana.

A staggering one in 10 known species on the planet can be found in the Amazon rainforest, including 40,000 plant species, 3,000 fish species, 1,500 bird species, and 370 types of reptiles. This area has also become the last remaining habitat where visitors have the opportunity to spot some of the world’s endangered species in the wild, such as jaguars, pink river dolphins, and harpy eagles. The Hoatzin, a bird found only in the Peruvian Amazon Rainforest.

The Amazon also represents more than 50 percent of the Earth’s remaining rainforest, where almost 400 billion individual trees, which are divided into 16,000 species, can be found.

Without the 6,437 kilometer-long Amazon river, this complex and lush network of tributaries and forests would be virtually impenetrable by humans. Thankfully, the spectacular waterway that gives the jungle much of its life also offers explorers a chance to experience this wildlife kaleidoscope by means of an Amazon river expedition.

How deep is the Amazon River?

Where is the Amazon River?

The Amazon River is in South America, originating in the Andes Mountains of Peru and flows through Ecuador, Colombia, Venezuela, Bolivia, and Brazil where it empties into the Atlantic Ocean.

But what makes Peru the destination of choice for an Amazon rainforest adventure as opposed to its shared countries?

Reasons Why Peru is the Best Place to Visit the Amazon

1) The Birthplace of the Amazon

It is at the eastern tip of the Pacaya-Samiria National Reserve, where the Ucayali and Marañon rivers converge, where the Amazon river is “born”. While the precise length of the Amazon river is still open to interpretation, it is commonly accepted that it is at this very confluence that the ‘Amazonas’ begins. It is also at this very location where Aqua Expedition vessels navigate, and is considered the region’s most pristine expanse, with the chance to swim, kayak and canoe in its mystical black water lagoons. In Peru, visit the birthplace of the mighty Amazon River.

The Peruvian Amazon is smaller than Brazil’s rainforest surface area,  making a wildlife adventure more personal and forgiving. Finding five-star creature comforts in the jungle is an advantage while sailing with Aqua Expeditions.

Onboard the Aria Amazon and Aqua Nera luxury vessels, guests are guaranteed to feel at ease in the middle of the wilderness. Air-conditioned spacious suites with panoramic windows and elegantly customized interiors will offer comfort and tranquility after each day’s excursions. Guests can indulge in a full moving panorama of the Peruvian Rainforest aboard the brand-new Aqua Nera.

Designed by renowned architects and designers, Aqua Expeditions Amazon ships also feature deluxe amenities such as a river-facing jacuzzi/plunge pool, indoor lounge and bar, gym, cinema (Aqua Nera), and spa — everything needed to reassure guests and help them feel at home in Amazonia, and then some!

It is fair to assume that visitors would need to change a few planes, cars and boats to get to the heart of the Amazon Rainforest, and that is probably true — with one notable exception: getting to the Peruvian Amazon.

With daily direct flights to and from the Peruvian capital of Lima, guests can easily get to Iquitos, the gateway to the Amazon in Peru, and the starting point for an Aqua Expeditions Amazon journey. Fun fact: Iquitos is the largest inland port in the world only accessible by river and air (The Lima-Iquitos flight takes a bit less than two hours, operated by LATAM Airlines). While the destination is remote, accessibility is hassle-free, which means guests do not have to worry about exposure to mass tourism. 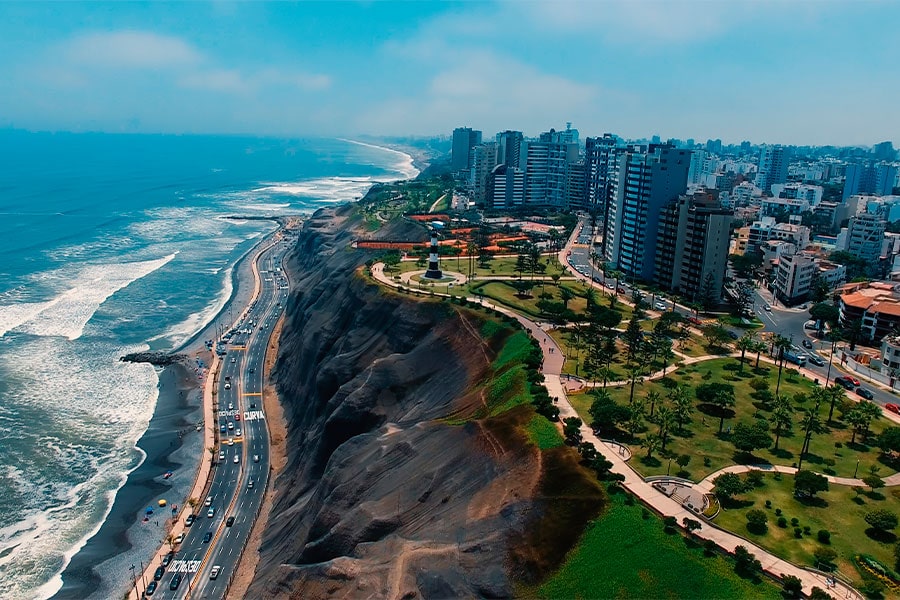 Lima – Peru’s bustling capital and gastronomic heart of South America – is just a two-hour flight away from Iquitos.

Compared to other Amazonian countries, the Peruvian Amazon rainforest is also the easiest one to access. For instance, to reach Manaus, the capital of the Amazonas state in north Brazil located over 1,609 kilometers inland, visitors will need to take a direct flight from São Paulo or Rio de Janeiro or non-direct ones from other major cities. The shortest flight duration is around four hours, and the ticket prices are higher than in Peru. The Amazon in Colombia has only two direct flights from Bogota per day (and guests won’t get to sail on the actual Amazon river).

In the Peruvian rainforest, guests get to witness the spectacle of the largest protected flooded forest in the world, the Pacaya-Samiria National Reserve. There, over 1,204 plant species, 449 bird species, 256 fish species, 102 mammal species, 69 reptile species, and 58 amphibian species can be found. An Aqua Expeditions skiff ride into the Pacaya-Samiria National Reserve on the Amazon River, Peru.

What makes this area truly unique is the cycle of rising and falling rivers like no other region in the Amazon. When visiting Pacaya-Samiria during the high water season, the majority of the area will be flooded and guests will sail in private skiffs among tree canopies with a high concentration of wildlife. Meanwhile, when the river is at a low level, guests can explore more of the rainforest on foot, as trails and jungle paths will become more accessible.

In fact, Pacaya-Samiria is a remarkable place for several reasons. It is estimated that 42,000 people live within the reserve. Visiting this area will teach you a lot about the indigenous way of living and their relation to the river and surrounding nature.

Another important difference between this stretch of the river versus the Brazilian Amazon is that the latter is significantly wider, making it difficult to see the opposite shore. This makes it a more populated and commercial area, allowing for large ocean-going cruise lines of hundreds of passengers to navigate until Manaus, with limited opportunities to truly immerse in nature.

On the contrary, the river and tributaries of the Pacaya-Samiria Reserve are narrower, enabling guests traveling onboard Aria Amazon or Aqua Nera to connect with this pristine environment from the comfort of the ship and during private skiff excursions along snaking waterways deep into the Amazonia. Seasoned local English-speaking naturalist guides born-and-bred in this region lead guests on rewarding up-close wildlife encounters and cultural discoveries.

Peruvians take great pride in their cuisine, and every region in the country has its own traditional fare ⁠— including the Peruvian Amazon!

From the native paiche fish to the Aji Negro, a fermented sauce made from a local variety of yuca (cassava), native Amazonian people of Peru have over centuries developed their own unique flavors and ways of cooking.

It would have been next to impossible for outsiders to sample native Amazonian produce and ingredients if not for Pedro Miguel Schiaffino, a celebrated Peruvian chef who has been dedicating his career to promoting the Amazon’s culinary gifts to the world. As the consulting chef responsible for creating the only rainforest-to-table Amazonian menu on an Amazon river expedition, award-winning Chef Schiaffino has also contributed to the conservation of the dwindling paiche fish population, by educating locals on sustainable cultivation techniques, and promoting Amazonian produce to top-tier restaurants in Lima to generate income for Amazonian natives.

Aside from the Amazon, Peru is also the mystical and vibrant epicenter of ancient South American culture. In addition to Machu Picchu, a wealth of spellbinding archaeological attractions, such as the Nazca Lines and Chan Chan await, alongside displays of vibrant culture in locations such as Lake Titicaca. Peru as a country is relatively compact so guests can easily fit the Amazon and other once-in-a-lifetime sights into a two or three-week itinerary.

You can find more facts about the Amazon here.
Love to travel and explore? If you found the article useful, subscribe to our monthly e-newsletter for the latest news, insights, and deals in the world’s most spectacular holiday destinations.

Amazon Rainforest: What to See and Do
The Most Exciting Excursions on Aqua Expeditions’ Adventure Cruises
Hoatzin Birds: the Strangest Bird in the Amazon?