The name may cause you to laugh out loud, but we can assure you that the blue-footed booby is as endearing and as comical as its Spanish namesake ‘bobo’- which is translated as clown or foolish, for its clumsiness on land. A marine bird native to subtropical and tropical regions of the western Pacific Ocean – from the Gulf of California to the western coasts of Central America, and South America – nearly 70 percent of the world’s population of blue-footed boobies are found in the Galapagos Islands. Aboard Aqua’s newest superyacht Aqua Mare, you will have plenty of opportunities to see these easily recognizable birds thanks to their distinctive blue feet! Here we share five fun facts about blue-footed boobies.

Blue is the Warmest Color 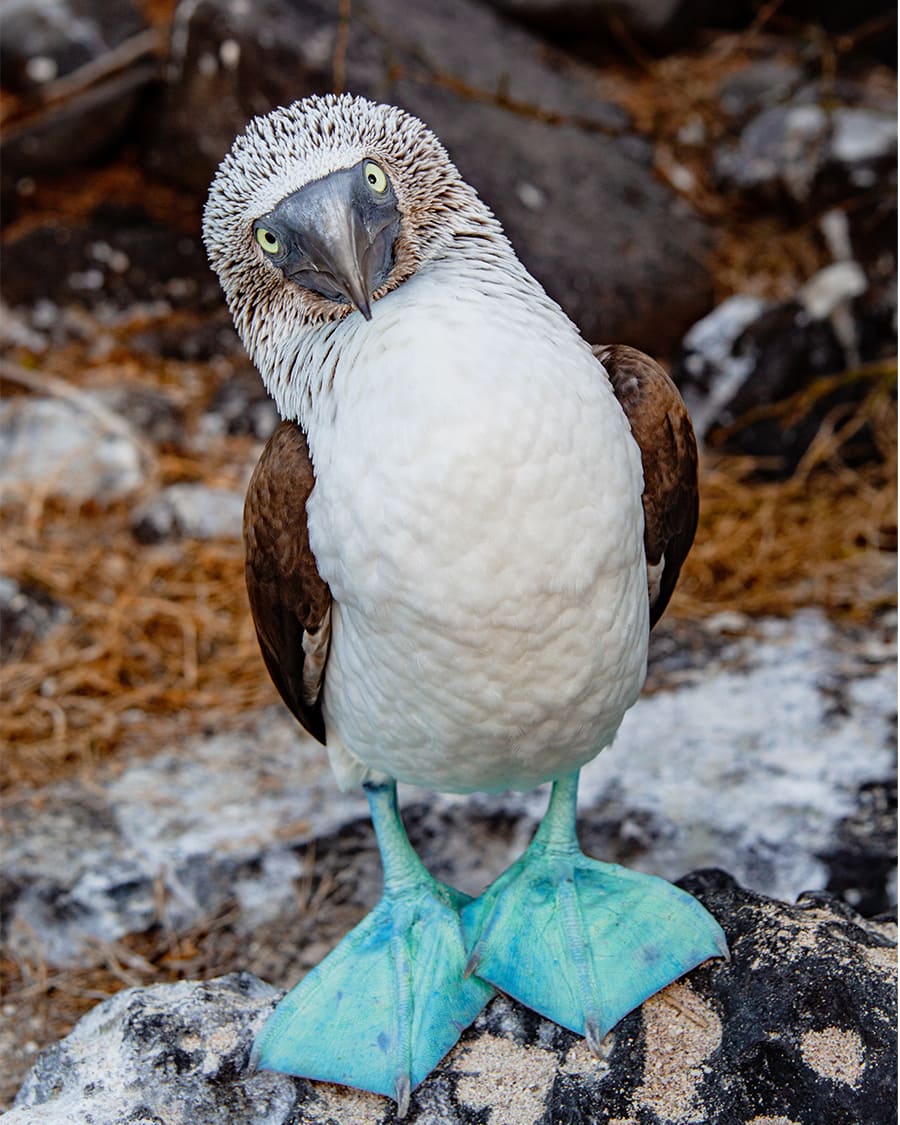 You will be able to find three of the world’s six different species of boobies in the Galapagos Islands – the Nazca, the red-footed and the blue-footed booby. The distinct color of the blue-footed booby however makes this bird a highlight of any trip to the Archipelago. The blue color of the booby’s webbed feet comes from the carotenoid pigments obtained from its diet of fresh fish, which acts as antioxidants and stimulants for the bird’s immune function. What is more interesting is that the coloration plays a large role in sexual selection among the species, thanks to its rapid indicator of the bird’s level of nourishment. Experiments have shown that both male and female blue-footed boobies evaluate their partners based on foot color – with the females choosing to mate with younger males with brighter feet, while males choose attractive females with brightly colored feet as an indication of good genetic quality of her eggs!

Do a Little Dance If you’re lucky enough to visit during mating season, which occurs between June and August, you’ll get to watch one of the more elaborate courtship rituals of the Galapagos Islands. It begins with the male blue-footed booby presenting the female with a small stick or stone, after which he tips wings, tail and beak to the sky and whistles – a move that is called ‘sky-pointing’. He then proceeds to march, strut and dance around the female in a high-stepping motion, finally finishing in a flourish by showing off his feet. Once a match has been made, blue-footed boobies usually mate for life, although there is a potential for them to be bigamous. While their dancing is certainly a spectacle, any visitor to the Galapagos will be impressed by the fact that blue-footed boobies make excellent swimmers. Their awkwardness on land is compensated by their agility in the air and water thanks to the aerodynamic nature of their cigar-shaped bodies. Add narrow wings and a long pointed tail, the blue-footed booby is remarkably fleet and nimble – showing their acrobatic skills as fishing birds, reaching a speed of 90 kmh (60 mph) while diving into depths of up to 25m (82ft). They can do this because they have special air sacs in their skulls that protect the brain from enormous pressure. Instead, they breathe through the corners of their beaks and their nostrils are permanently closed! Plunge diving, as it is called, is usually done as a flock and from heights of 10 to 30m (33 to 100ft), and small schooling fish such as sardines, anchovies, mackerel, and flying fish are their prey of choice. Outside mating season, blue-footed boobies tend to spend most of their time out at sea, which means that the best time to see them is during the months of June, July and August. While the bird’s Galapagos population has seen a large decline in recent years with numbers dropping from over 20,000 birds in the 1960s to only 6,400 birds in 2012, the Archipelago is still one of the best breeding grounds for the species. Seymour Norte in particular sees blue-footed boobies occurring at high frequency, while the islands of Española, Fernandina, Floreana, Isabela, Pinzon, and Santa Cruz boast large breeding grounds. Aqua Mare sails to Española and Santa Cruz on its East itinerary, while Isabela, Floreana and Santa Cruz islands are highlights on Aqua Mare’s West itinerary, so you will be sure to see them when you join us! One of the reasons why the blue-footed boobies are called ‘foolish’ is because they do not traditionally construct nests, preferring instead to lay them on the ground, putting the eggs at risk of being stepped on by visitors! However, their nesting area is usually surrounded by a ring of excrement to mark out their territory to others. Unlike most birds, blue-footed boobies do not have a brooding patch – bare skin on their underbelly – to keep their eggs warm, instead using their bright webbed feet for up to a month after hatching, to ensure their young are well insulated. So perhaps they aren’t as foolish as one might think!

Aqua Mare offers the option to combine the east and west seven-night itineraries into a 14-night immersive exploration of the Galapagos Islands for the ultimate lifetime adventure. Head to www.aquaexpeditions.com where you can find out more from one of our reservations team.