Situated a thousand kilometers off the coast of Ecuador, the Galapagos archipelago is one of the most unique destinations on the planet. It features unparalleled landscapes – created through millions of years worth of volcanic activity – and pristine ecosystems which thrive without human interference.

Even within the archipelago, there’s a lot of diversity to be found. There are over a hundred islands, islets, and rocks which make up the Galapagos Islands, each featuring their own distinctive features. Among these, 13 are classified as major islands and only four are inhabited.

Needless to say, your expedition to the Galapagos Islands will certainly be defined by the islands you visit. Here is our pick of top five destinations, along with the itineraries which take us there while sailing on Aqua Mare.

First off, every Galapagos Islands expedition warrants a trip to Santa Cruz. After all, it’s the archipelago’s most popular tourist destination for a reason. Home to visitor sights such as the Darwin Station and Fausto Llerena Breeding Center, Santa Cruz is the perfect place to observe some of the Galapagos Islands’ famous wildlife such as giant tortoises and land iguanas. 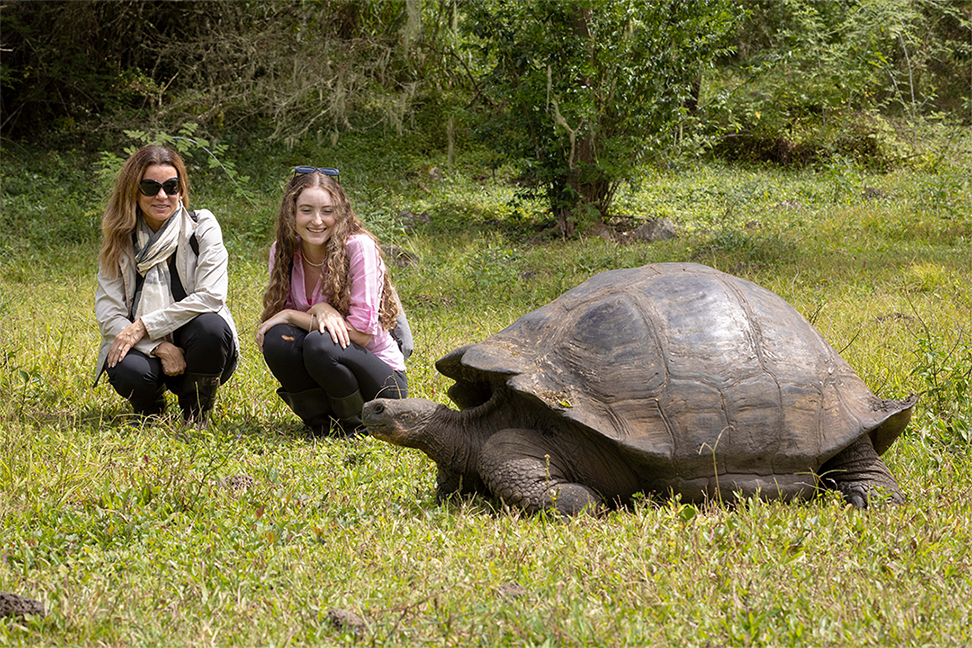 Along with this, the island is also home to the famous Los Gemelos twin craters. In reality, these are not craters but sinkholes – created as a result of collapsed magma chambers – with a depth of almost 300 meters. Today, they flourish with lush vegetation all-year-round as well as a large population of bird species including Darwin’s finches. Located on the highlands, the Los Gemelos craters are a twenty-minute drive away from the town of Puerto Ayora.

South-east of Santa Cruz lies Santa Fe, one of the oldest islands in the Galapagos archipelago. Although it’s relatively small – only 24 square kilometers in area – there is plenty to do to keep busy here.

The northeastern shore of the island – known as Barrington Bay – is populated by colonies of friendly sea lions. These curious creatures will come right up to say hello as you walk to shore after a wet landing. While sailing with Aqua Expeditions, you’ll also have the opportunity to go snorkeling, kayaking, or stand-up paddleboarding in the cerulean blue waters nearby. For those who prefer land-based adventures, Santa Fe features two hiking trails. The first is a 1 kilometer circular route which takes you along the coastline and leads you through an Opuntia (prickly pear cactus) forest before returning to the coast. The second is a relatively steep climb up a cliff, at the end of which lies a stunning panoramic view of the island’s landscape.

The largest island of the archipelago and one of the most picturesque as well – Isabela Island is easily spotted on a map by its seahorse-like shape. The island was formed by six shield volcanoes – Ecuador, Wolf, Darwin, Alcedo, Sierra Negra, and Cerro Azul – of which five are still active. These volcanoes tower as high as 5,500 feet and are mostly located towards the center of the island. 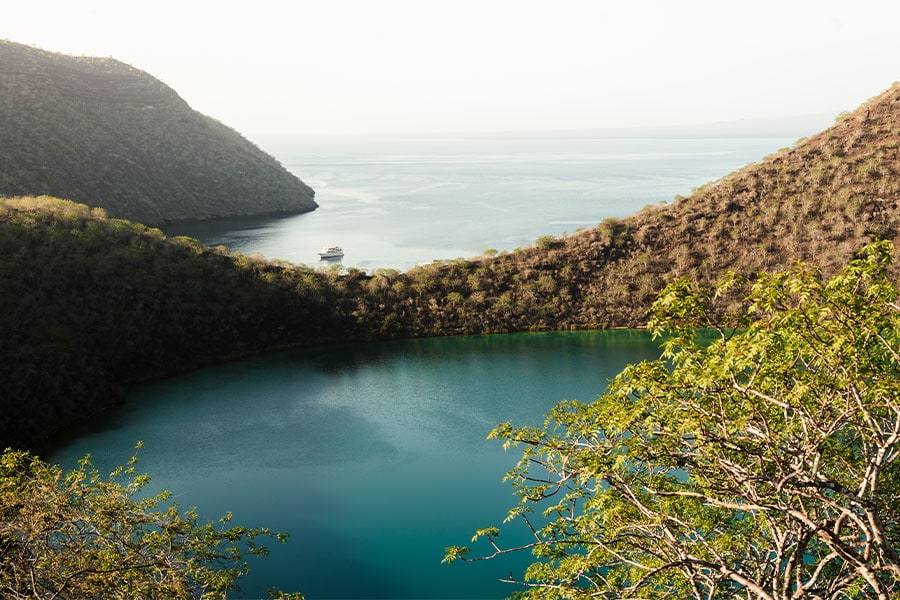 Isabela features hills covered with forests, vines, and orchids leading all the way down to the sandy coastline. It is one of the four populated islands in the Galapagos archipelago, with almost 2,000 people living there.

The island is also an ideal place to spot marine life which inhabits the Galapagos region. Just beyond the west coast of the island is the site of the nutrient-rich Cromwell current. This creates a feeding ground for fish, whales, and dolphins. If you are lucky, you may be able to spot one of the 16 species of whales that have been identified in the area including humpbacks, sperms, sei, minkes and orcas.

Floreana Island is one of the only islands in the Galapagos archipelago which is worth visiting not only for its natural attractions, but its heritage as well. Home to the archipelago’s first resident – an Irishman named Patrick Watkins who lived there from 1807 to 1809 – Floreana offers an unrivaled insight into the lives of buccaneers who frequented the region. One of the most popular tourist attractions here is Bahía Post Office, which was established way back in 1793. It was the Galapagos Islands’ first post office, often used by pirates to send messages back and forth. The post office is still operational today with two barrels to drop off and collect postcards addressed to locations around the world.

Apart from man-made attractions, Floreana Island is also home to a variety of bird species including Galapagos penguins, American flamingos, and tree finches.

Another island known for its bird life, Espanola is the most southerly destination in the Galapagos archipelago. It’s the only place in the world where waved albatrosses are known to use as a breeding ground. For those visiting between June and August, there’s also the opportunity to watch the enchanting mating dances of the famous blue-footed boobies. Being one of the driest islands in the archipelago, Espanola has given rise to large sandy bays which attract a healthy population of Galapagos sea lions. Upon disembarking at Bahia Gardner – a coralline sandy on the west coast of Espanola Island – those traveling through East Galapagos will be able to spot and interact with these playful animals.

There will also be a chance to go on a tender ride past a beautiful array of nearby islets and snorkel among sea turtles, sharks, rays, and different species of reef fish.