Formed as a result of hundreds of years of repeated volcanic eruptions caused by the gradual movement of the Nazca tectonic plate to the east, the remote Galapagos Archipelago consists of 18 islands and more than 100 small islets located 1000 km off the coast of Ecuador in the Pacific Ocean. What was originally a chain of underwater volcanoes emerged from the ocean surface to become the cone-shaped islands we now see; each created by the eruptions of a single shield volcano. The only exception to this is Isabela Island, which is the largest in the Archipelago, originating from the union of six volcanoes.

The best way to explore the Archipelago is via boat. The 50m Aqua Mare yacht takes an iconic once-in-a-lifetime adventure to the next level, taking guests on the first true superyacht luxury experience in the Galapagos Islands, with the choice of four five-star itineraries that sail across the east and west islands of the Archipelago. Each of the islands varies in age and geology, with the island formations situated farthest from the Galapagos hotspot being the oldest, such as San Cristobal and Española at approximately 4 million years old. The older eastern islands are greener as they have had more time to develop a richer and deeper soil for forests and vegetation to thrive. The islands located to the west of the Galapagos hotspot on the other hand have only been created less than one million years ago and are still in formation. The presence of volcanic activity makes for spectacular geological formations such as those found on Isabela and Fernandina islands. Centrally located within the Archipelago, Santa Cruz is the focal point for any Aqua Mare itinerary. As the second largest of the Galapagos Islands with an area of 986 square kilometers, it is the main tourism hub for the region given its proximity to the airport on the island of Baltra to the north. With its long history of human settlement and agriculture thanks to settlers from the United States and Europe post World Wars, it is naturally the most altered of all Galapagos islands. However, it is also the only island that visitors may readily experience the interior and higher elevations of any Galapagos island, due to its connectivity of paved roads. What to see: The island has six vegetation zones, which means visitors are able to experience a contrast of the arid zone located at the base of the island, with the scalesia and miconia zones at 700 m above sea level. The only location you will find one of Galapagos’ rarest bush forests stands in the center of Santa Cruz, spread on top of Los Gemelos craters, and on the island of San Cristobal. Santa Cruz also boasts the largest accessible lava tunnels in the entire Archipelago. Formed by different temperature kinds of lava flow, hundreds of lava tunnels number several kilometers long, and while many have collapsed over time and erosion, they offer visitors a glimpse into the island’s swashbuckling past with stories of pirates and hidden treasure! Aqua Mare Highlights: The highlands of Santa Cruz have a large wild population of giant tortoises, which roam freely around the private and National Park lands. A visit to the Charles Darwin Research Station and Fausto Llerena Tortoise Center shows both kinds of Saddleback and Domed-shell tortoises, allowing visitors to discern the separate evolutionary processes. If visitors prefer human company, we recommend heading to Puerto Ayora, which is the heart and soul of the Galapagos Islands’ population. Situated in Academy Bay on the southern coast of Santa Cruz, Puerto Ayora is a charming port town where visitors will find creative architecture, Shopping boutiques, small restaurants with delicious seafood, sailboats filling the bay, and modern facilities including a hospital, banks, post office, and many hotels and tour operators offering hiking tours, dive trips, mountain biking and horseback riding excursions. Named after Juan José Flores, the first president of Ecuador, whose administration took possession over the Archipelago, Floreana is the first successfully populated island of the Galapagos Islands. However, only 200 people populate the island, compared to 12,000 on Santa Cruz, but don’t let that fool you into thinking the island is a dull destination. It arguably has the most interesting history of all the islands in the Archipelago, thanks to its buccaneer past. It is the site of the Galapagos Islands’ first ‘post office’ – which was established in 1793 by whalers and home to the first Galapagos resident – an Irishman named Patrick Watkins who lived there from 1807 to 1809. What to see: The island has been recognised as an Important Bird Area (IBA) by BirdLife International. As the main colony of critically endangered Galapagos petrels in the Archipelago, Floreana boasts about 350 nests scattered beneath a dense vegetation among the rocks. Medium tree finches are also endemic to the island, while other significant species include lava gulls and Galapagos penguins. The flamingo lagoon at Punta Cormorant is where visitors can watch Galapagos flamingoes wade through brackish water, sifting through the mud for shrimp. Pintail ducks, stilts, large-billed flycatchers, several species of finch, and many other shorebirds can also be seen here. Aqua Mare Highlights: Bahía Post Office was a messaging system of the pirates, and is still used to this day, albeit for us normal citizens. The island still maintains two barrels to drop off and collect postcards addressed to locations around the world and it is customary to forward on the mail which is closest to your home. Ask your captain for your very own Aqua postcards should you wish to continue the tradition. Aqua Mare also stops at Devil’s Crown, a volcanic crater that is semicircular in pattern where snorkelers can find an underwater playground featuring sea lions, colorful king angelfish, balloon fish, hawkfish, yellowtail grunts, tiger snake eels, white-tipped sharks, eagle rays, amberjacks, wrasses, hammerhead sharks, and sea turtles. The largest island of the Archipelago measures 5,825 square kilometers and is easily recognizable on the map due to its seahorse shape. Isabela Island was formed by six shield volcanoes – Ecuador, Wolf, Darwin, Alcedo, Sierra Negra, and Cerro Azul, of which five are still active, with both Wolf and Ecuador Volcanoes lying directly on the equator. Five of the volcanic craters reach an elevation of 5,540 ft, dominating the island’s center, with hills covered with forests, vines, and orchids leading down to the sandy coastline. The human population of Isabela is small with only 1,800 people contributing to agriculture, fishing or tourism, but its history is far from pastoral – Caleta Tagus on the northwestern side of the island provided a sheltered anchorage for pirates, buccaneers, whalers, while Puerto Villamil was named after the freedom fighter from Guayaquil, José de Villamil. What to see: Isabela Island is the home of penguins, flightless cormorants, marine and land iguanas, and many marine birds, where visitors will be able to capture insights into the evolution process of species in different locations of the island. The west coast of the island is the site of the upwelling of the nutrient-rich Cromwell current that creates a feeding ground for fish, whales, dolphins, and birds. If you are lucky, you may be able to spot one of the 16 species of whales that have been identified in the area including humpbacks, sperms, sei, minkes and orcas! 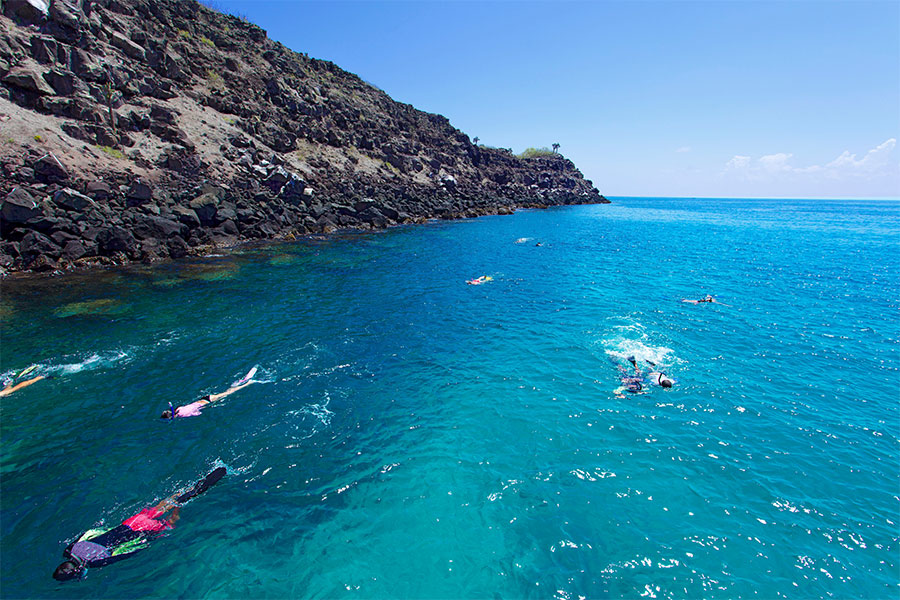 Aqua Mare highlights: Bahía Urbina is where visitors will experience one of the most unique places in the Galapagos Archipelago. Urbina is a 6km point that was once underwater, uplifted in 1954, up to 3m above sea level. It is here where you can see tortoises, land iguanas and the biggest marine iguanas roaming free in the Archipelago. The hike is long, so your naturalist guides will offer different options to hike, snorkel or simply enjoy the black sand beach. Punta Moreno is another interesting visitor site – a hike will take visitors to the mangroves and gas-rich basaltic lava rocks, a result of a large basaltic lava flow which came from the Cerro Azul volcano on Isabela hundreds of years ago. Commonly seen species include flamingoes, paint-billed crakes, white-cheeked pintails, and common gallinules. Reward yourself with an adventure of a lifetime expedition to islands born of fire, the Archipelago of Galapagos aboard Aqua Mare. Witness one of history’s greatest scientific discoveries by experiencing the extraordinary power of nature to adapt to its environment: evolution. Contact our team at [email protected]