Exploring the inspiring natural beauty and wildlife of the Peruvian Amazon jungle is one of life’s greatest adventures. Covering 60 percent of the country’s territory, its vast lush rainforests and rivers comprises one of the most biodiverse ecosystems on earth.

At Aqua Expeditions, we consider ourselves fortunate to navigate inside the Pacaya Samiria National Reserve, the second largest protected area in Peru and birthplace of the Amazon River. With every excursion into the deep Amazon rainforest, a world of opportunities opens up with anticipation of what creature will cross our path next. All we know is that over one thousand species of animals inhabit this pristine environment, and that with a bit of patience, luck, and the highly trained eyes of Aqua’s naturalist guides by our side, we will offer unforgettable experiences encountering them up-close. Of the 449 bird species found in the Pacaya Samiria Reserve, one of them stands out as the largest and most powerful raptor of them all: the legendary Harpy Eagle (Harpia harpyja). Although this species can be found in tropical lowland rainforests throughout Central to South America, spotting Harpy Eagles in the wild is extremely rare. They inhabit the upper canopy layer in areas of dense uninterrupted vegetation so it’s unlikely you will see them flying over the canopy in wide-open spaces.

However, every now and then we get lucky enough to spot a Harpy Eagle while out on our daily excursions aboard our Amazon expedition vessels Aria Amazon and Aqua Nera. Our last sighting took place in the Yanayacu-Pucate Reserve, causing our guests and guides to gaze in awe at this majestic creature.

It was a spectacular sighting as the Harpy Eagle was very close to the community “20 de Enero” and it had a dead sloth in its clutches. After a long while, it decided to glide with its prey across the river until it got lost in the thick forest. That was one of the most exciting moments I have experienced in my years as a birdwatcher guide, and I still remember it to this day. Hopefully we can see it again this year.

Join us as we learn more about the fascinating physical and behavioral traits of the Harpy Eagle as we long for our next magical encounter.

Besides their colossal size, Harpy Eagles are characterized by their dark grey plumage and light grey head, crowned with a distinctive double crest that rises when in a state of alert. It possesses a predominantly white underside except for the black stripes on its feathered tarsi and a black band across its upper breast. With a grand presence and a penetrating stare, photographing a Harpy Eagle in the wild is on the top of every wildlife aficionado’s list.

A Harry Potter fan? Did you know that Dumbledore’s magical creature companion “Fawkes the Phoenix” was inspired by the Harpy Eagle? 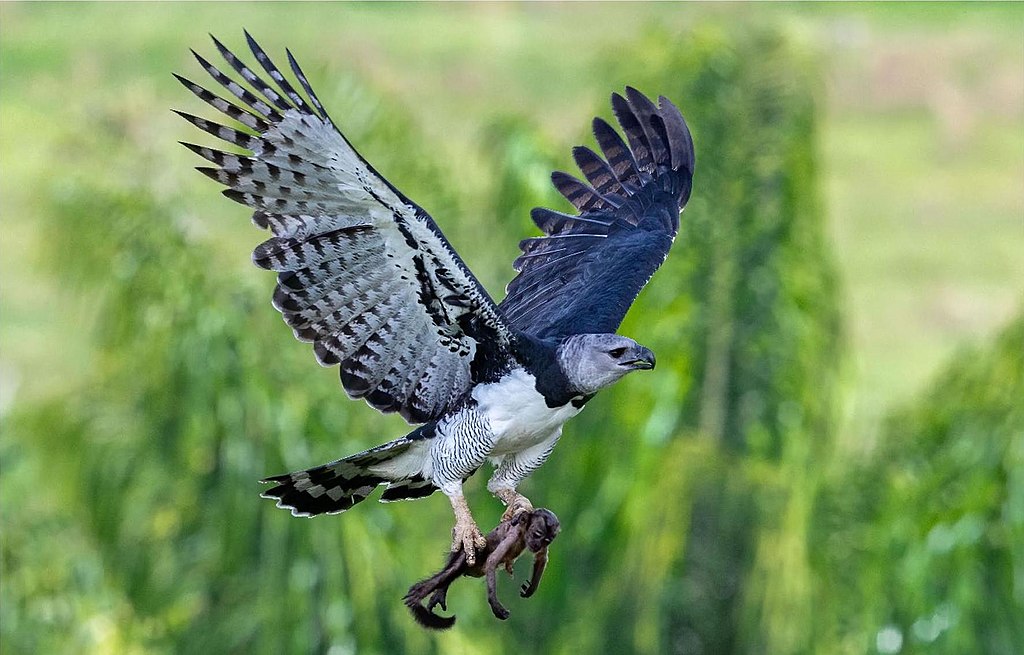 Standing at the top of the food chain, Harpy Eagles follow a strict carnivore diet, feeding on arboreal animals, mainly sloths and monkeys. In fact, they help to keep their prey’s population in check, particularly in controlling mesopredators (mid-level predators) such as capuchin monkeys.

These mighty predators are solitary and effective hunters, usually sitting on a perch and silently flying short distances to examine the canopy for prey. Once identifying their next meal with their sharp vision, they are able to fly down with a speed of up to 80 kilometers per hour (50 miles per hour) and use their large and powerful talons (bigger than a grizzly bear’s claw!) to catch their prey. Harpy Eagles are mainly found in pairs as they form monogamous couples that mate for life and are estimated to live 25 to 35 years if they remain healthy. Harpy Eagle couples live together in a nest, and chirp to each other as they build their homes. In the Peruvian Amazon, Harpy Eagles will often build their nest high up a kapok (or ceiba) tree, known as the Giant of the Amazon for their sheer size of up to 50 meters (164 feet) tall.

A pair of Harpy Eagles typically produce two to three chicks every year. Although the female lays two eggs, once the first one hatches, they stop incubating the second egg and focus on raising their chick until it fledges six months later. According to the IUCN the global population of Harpy Eagles ranges from 100,000 to 250,000 mature individuals. Unfortunately, its population size has suffered a continuous decline, and the species is currently classified as vulnerable by the IUCN’s Red List of Threatened Species. Deforestation within their habitat range such as the Amazon rainforest; hunting, logging, agriculture, and poaching are among its biggest threats, causing them to even become locally or regionally extinct in certain parts of Central America and Brazil. Protecting rainforest habitats from deforestation, forest restoration, research and education programs are amongst the main actions to help restore the populations of Harpy Eagles and other vulnerable species.

Aqua Expeditions’ voyages in the Peruvian Amazon offer guests a diversity of educational and immersive experiences while sailing in comfort aboard our best-in-class vessels Aria Amazon and brand-new Aqua Nera. Contact us to start planning your bucket-list Amazon adventure!