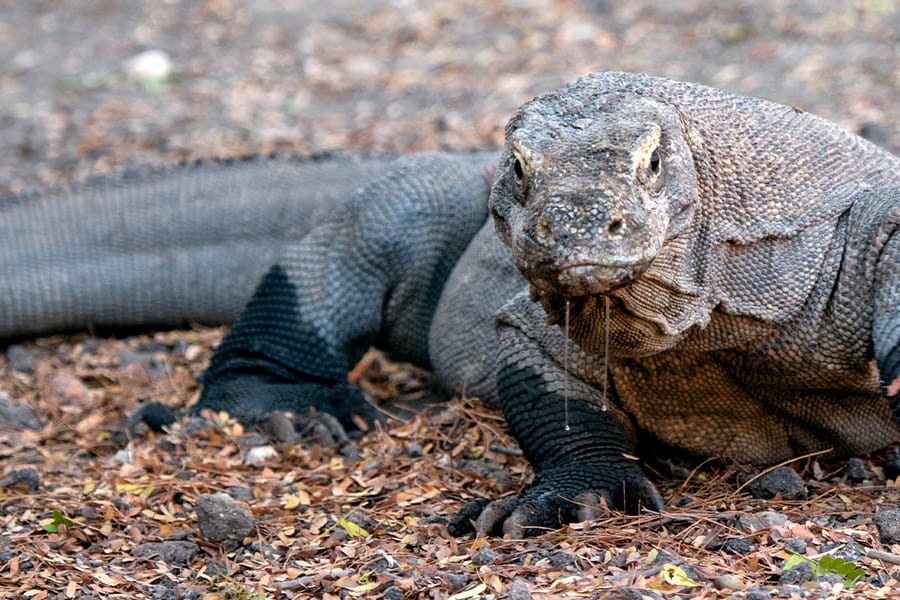 Komodo dragons are endemic to the Komodo Islands, a UNESCO World Heritage Site.

The Komodo dragon, the king of the lizards, is the world’s largest and heaviest reptile. Named after the island where humans spotted a dragon-like creature for the first time, the Komodo dragon is an endemic Indonesian species found on Komodo Island and its neighboring islands.

On our Komodo Island itineraries, we sail to Loh Buaya on Rinca Island, Nusa Tenggara. Famous for stunning sceneries and calm winds, it is the perfect atmosphere for trekking and for your up-close encounters with these prehistoric Komodo dragons. Another hotspot will be Horseshoe Bay at the southern end of the islands, where you can visit the dragon’s favourite haunts aboard the Aqua Blu skiffs.

The Komodo Dragon’s size, made up of a long tail, strong and agile neck, and the forked tongue makes for a mean sight to behold. Even more so, in recent years, visitors have increasingly swamped this Indonesian island, intimidated by the thrill of coming so close to such a wild and endangered creature.

Komodo dragons are not to be taken lightly, as they are one of the strongest predators in the lizard species, having taken on much bigger prey, even humans.

Their sense of smell is highly developed, and is their greatest asset when hunting for prey. Using their forked tongues, the dragons have an acute sense of smell that they can detect warm-blooded animals from up to five miles away. A curious organ on the roof of their mouth, called the Jacobson’s organ, analyzes the information from the tongues and signals the direction of the prey.

These giant lizards can reach up to 10 feet in length! Male dragons can grow up to 10 feet (or three meters long), while females can grow up to eight feet (or two and a half meters long). They have a muscular tail that is almost as long as the length of their bodies. Some of them weigh a whopping 136 kg (300 pounds), with the average weight of the Komodo dragon being about 80 kg (176 pounds). With massive claws and powerful legs, the Komodo dragon can run very fast in short bursts, and are also strong swimmers. Laced with venomous proteins in the form of potent anticoagulants (compounds that prevent blood clots), the saliva of the Komodo Dragon makes it one of the most efficient predatory creatures known to mankind.

Komodo dragons have 60 razor sharp teeth with the ability to replace themselves if damaged or lost. They can go through four or five sets of teeth in their lifetime, as they rely on their razor-sharp teeth and strong claws in attacking their prey. If its prey does not die from the attack, they have an even stronger weapon – their lethal venom. Their saliva contains 50 different strains of toxic bacteria – causing an instant and deadly infection in its prey.

Komodo dragons can swallow huge portions of meat swiftly. Their stomachs expand quickly and can consume up to 8-% of the dragon’s specific body weight – in a single meal. Once they have killed their prey or found a dead or decaying body, several dragons converge to share the meal together. The largest male dragon gets to eat first, followed by smaller males and females, with the juveniles eating the remains last.

The Komodo dragon can only be found on several Indonesian islands, having lived in this same habitat for millions of years. Preferring the tropical forests, dragons can also be seen on land or near water, clocking up kilometres daily in search for food.

Komodo dragons are carnivores, and they eat any kind of meat but mostly feed on carrion. They feed on small lizards, snakes and birds. If they live to be older than four years, they hunt for deers, their most-loved food, and other larger prey such as goats, rodents and monkeys. When adult Komodos are very hungry, their prey can also be smaller Komodo dragons.

Komodo dragons were discovered by western scientists in the beginning of the 20th century. Since then, they have been an object of observation and have gradually become a popular tourist attraction. In 1980, Indonesia established the Komodo National Park to preserve and protect the endemic Komodo dragon and other endemic species of the rich marine environment, including the orange-footed scrub fowl and the timor deer. Today, Komodo National Park is a UNESCO World Heritage site.

The conservation status of the Komodo dragon has classified them as a vulnerable species. In spite of all efforts, the influx of tourism may be posing a threat to the environmental conditions of the dragon’s natural habitat, interfering their mating process and resulting in a decreasing number of offspring. Moreover, Komodo dragons that live outside of the National Park are also at risk, due to quick shrinking of their habitat, as impacted by the increased human population. Possibly the biggest threat for the lizards are the illegal poachers who steal the dragons in order to sell them at high prices. Many wildlife lovers visit Komodo Island and other islands in the Komodo National Park to observe the giant lizard in its natural habitat. The influx of tourists has sparked much speculation and has raised the question of the safety of this glorious species and the environmental conditions of their habitat. All of this led to the Indonesian government considering completely closing Komodo Island as a conservation strategy for habitat recovery.

Nonetheless, the economic boost from the thriving tourism has become an important part of the conservation process and species preservation. Therefore, the habitat recovery strategy will only include restrictions to visits. Additionally, many new studies will uncover preservation methods in which the local population also plays a major part. Newly established education programs work with local communities to help build awareness of the species and the importance of protecting them and their habitat.

Watch our video on the Bali-Komodo Island itinerary on the Aqua Blu: