Famous for its wildlife and panoramic views

Located between the Komodo and Rinca Islands that completes the trinity comprising the National Park, Padar Island is praised for its larger-than-life views from its green-capped hills. As the hills overlook some beautiful beaches, the sunset seen from Padar’s highest points is nothing short of magnificent. The island’s dreamscape is a rare amalgamation of crescent-shaped beaches with white, pink, and black sand. Formerly a stomping ground for the endemic Komodo dragons, Padar Island today is a mostly savannah-covered, uninhabited island, yet is one of the most visited by tourists within the Komodo reserve.    Padar’s nature evokes admiration in tourists, welcoming them with an almost-fictional site of dreamy landscapes and lush green mountains of unusual shapes. The turquoise, pristine blue water of the bays that line the three sides of the hills, lead up to those colorful, sandy beaches. A truly fairytale-like piece of land in the midst of the Indonesian seas, Padar Island is a natural wonder worth visiting for its visual beauty and opportunities for outdoor experiences.

The Beaches of Padar Island

Each one of the bay’s beaches has uniquely-colored sand – pearl-white, coal-black and rose-colored sand that evoke the storybook atmosphere of Padar. When the sun bounces off the sand, it is almost like a spotlight is shone on Padar’s best features. The black-sanded beach is covered with sand blended with dark minerals, a residue of volcanic origin. On the other side of the island, the pink-sanded beach is residence to the microscopic organisms that pulverize red corals, leaving behind small red particles that mix with the white sand. Similar to the famous pink beach on Komodo Island, this small beach on Padar Island also has that distinct, dreamy, pale-pink colored sand.   The third beach with its snowy-white sand, is praised for its magical atmosphere. Next to the other colorful neighboring beaches its visual beauty seems substandard, however, it complements them and makes for a good contrast, helping the other two appear even more spectacular.

The hike to Padar’s summit is certainly praised among travelers and adventurers. Although an easy trek, the hike takes you past dreamy landscapes on your way up to the hill and will reward you with a view of the most mesmerizing panorama you will have ever seen. From the natural qualities of the island mentioned before, it comes as no surprise that this sweeping view from above will enhance everything that makes the place beautiful. There are numerous short treks offered on the island for explorers and quite a few hot spots for photographers. The dramatic nature of the sunset and sunrise further illuminate the beauty of the island when seen from the panoramic viewpoint. To enjoy the emergence of dusk or dawn, you need to be ready for trekking in the dark.    Padar Island Indonesia is home to diverse and rich wildlife. Despite it being a relatively small island, Padar is home to six species of sharks and two species of manta rays. Near the island, dolphins can also be seen along with the occasional whale, and reptiles, falcons, geckos, kites, and green turtles roam freely in the area. Everything on this island, from its dazzling azure waters to its rolling terrain and the striking tri-colored beaches, is truly a sight to be seen.

When and How to Visit Padar Island

Reaching Padar Island is more challenging than reaching the top of the island’s hill. It is often considered a great day trip from the nearby town of Labuan Bajo – a convenient point of departure to the island. It is recommended to take an organized island tour with an experienced guide. However, the best way to experience the most mesmerizing sceneries from the water and on land while getting a close look at the remarkable array of wildlife is by taking a cruise down the Komodo National Park to discover all of its hidden gems. 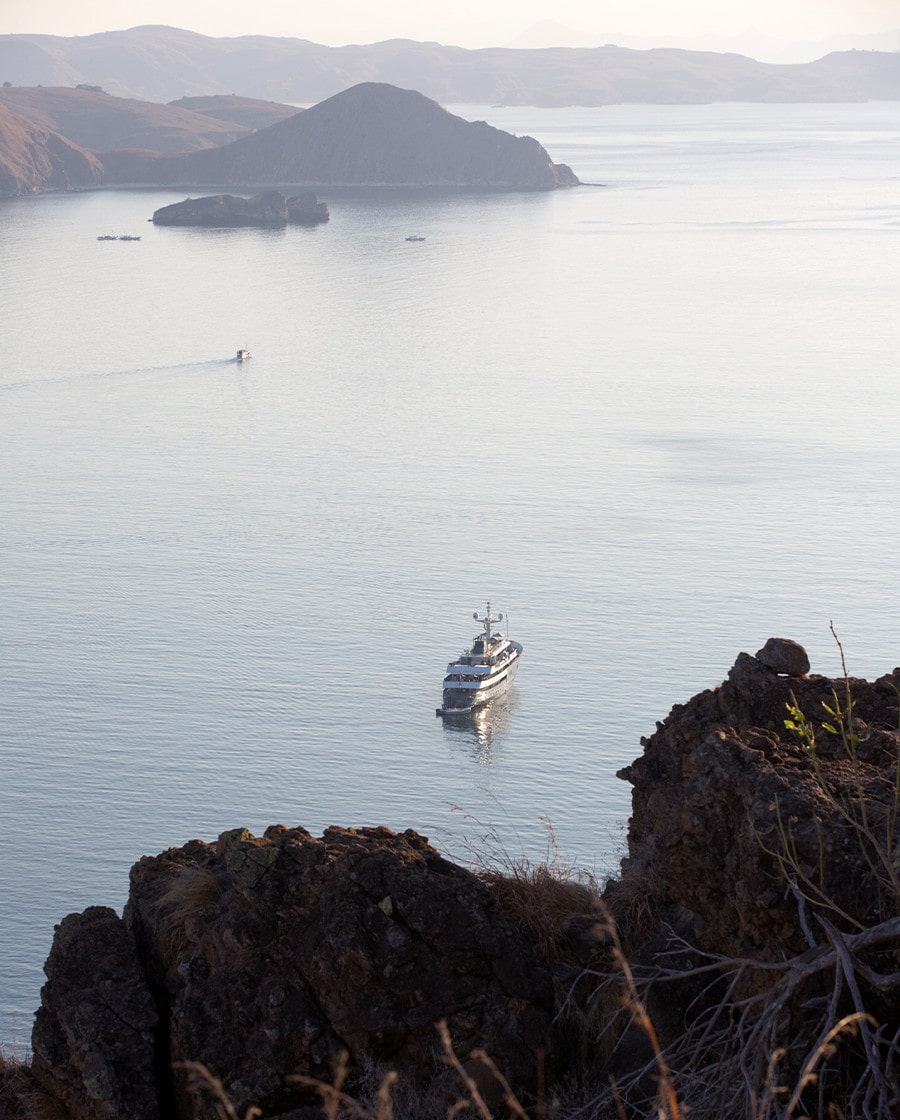 The best time to visit is from April to June, after the rainy season is over and the weather is warm and pleasant. The dry season between September and December is also a good alternative. The months of July and August are considered peak season where Padar Island becomes more crowded than usual.