From Bali to Lombok

Indonesia, the world’s largest island country with over 17,500 tropical islands is also the world’s fourth most populous country with more than 267 million inhabitants. Home to 300 ethnic groups, Indonesia’s culture is complex and diverse, shaped by a multitude of religions and influenced by various foreign cultures over the course of its history. Visitors can find in Indonesia an abundance of festivals and cultural displays, no matter the time of year. Each festival is very different to one another and reflects ancient customs and beliefs unique to a local tribe, celebrated and passed on from generation to generation.

We have selected five festivities in five locations within Indonesia that tourists can attend during their once-in-a-lifetime trip to Indonesia, combining a land and sea exploration aboard Aqua Blu, Aqua Expeditions’ coastal luxury yacht.

When to Travel? March, slightly varies from year to year according to Hindu Lunar New Year.

What is it? The most important Hindu holiday in Bali, Nyepi marks the Balinese New Year. It is celebrated every Isaawarsa (Saka new year) according to the Balinese lunar calendar, falling generally in the month of March. However, you won’t see fireworks or be part of an enthusiastic countdown for any midnight celebrations. Nyepi is literally the opposite, as the Balinese word translates to ‘Day of Silence’, and is meant to be a day to reflect, fast and meditate.

If you are looking for excitement, it is best to visit before or after Nyepi, when several rituals take place. On the day prior, a loud parade of ogoh-ogoh takes place, in which Balinese carry large statues of evil creatures that represent negativity and malicious spirits. At the end of the parade, these are burnt as an act of purification.

On Nyepi day, no work is permitted on the island. Locals and visitors alike are subject to many restrictions such as closed shops, no transport, no entertainment, and even no people allowed on the streets. Any electric power is prohibited, so Balinese homes remain dark during the night, and hotels are asked to cover their windows.

On the day after Nyepi, known as Ngembak Geni, social activity is resumed, and families, friends and neighbors reunite to exchange forgiveness — a clean start for the new year to come.

Travelers looking to experience the country’s traditions will find this unique way of celebrating new year an interesting immersion into local culture. They must note however that all restrictions also apply to tourists and the airport of Bali remains closed for the day so no trips should be scheduled on this day. Instead, enjoy the peacefulness and quietness of empty streets and an island-wide shutdown. 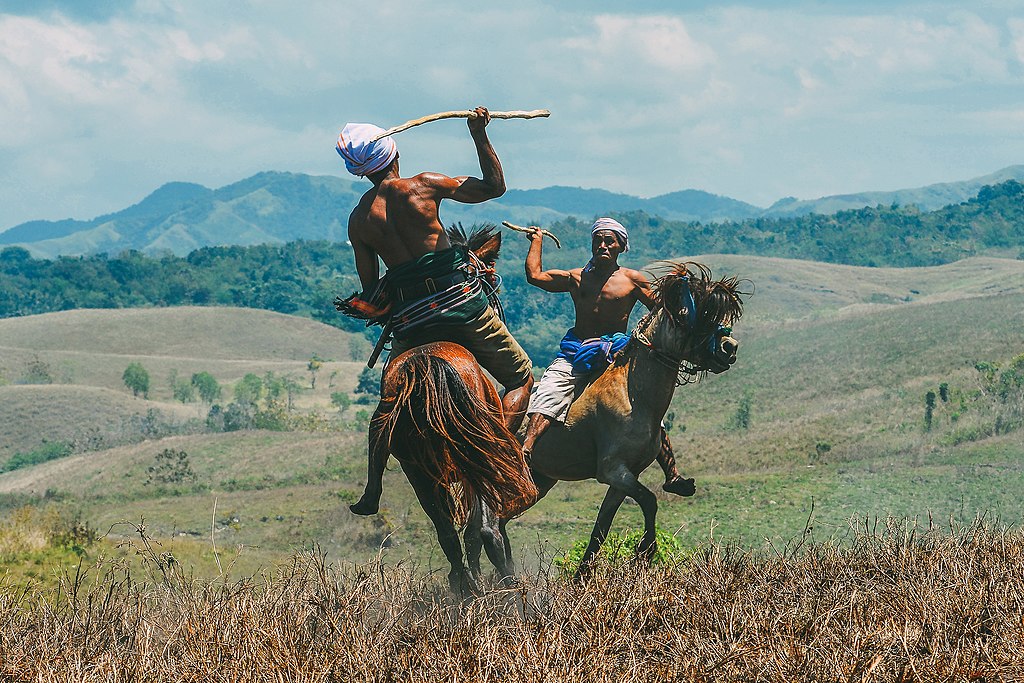 When to travel? February or March, exact date announced weeks prior.

What is it? On the remote island of Sumba, only an hour’s flight from Bali, a centuries-old tradition is celebrated by its people. Withstanding the test of time, Pasola (the equivalent word of “spear”) is an ancient war ritual that commemorates the rice planting season. During this one-of-a-kind event, two groups of 25 men from different western Sumbanese tribes fight each other, throwing wooden spears while riding horses.

Travelers can witness this fascinating event every year during the months of February or March in the areas of Kodi, Lamboya, and Wanokaka. Travelers will need to be flexible in their travel plans since the exact date is announced just weeks beforehand, decided by the Rato (tribal leaders) based on the prediction of a full moon which is when the Nyale (a type of sea worm) comes out to the beach.

During Pasola, selected skillful riders dress in traditional customs for the ceremony and ride colorfully decorated horses. They throw spears at the opponent aiming to spill blood on to the ground, which according to ancient Sumbanese beliefs, fertilizes the land ensuring a better harvest. In the modern day iteration, this ritual is no longer violent yet still retains its combative sentiment.

The Sumbanese also believe that this festival creates a condition of balance between material and spiritual needs, influencing the habits of the local people thus enabling them to live happily on both earth and in heaven. 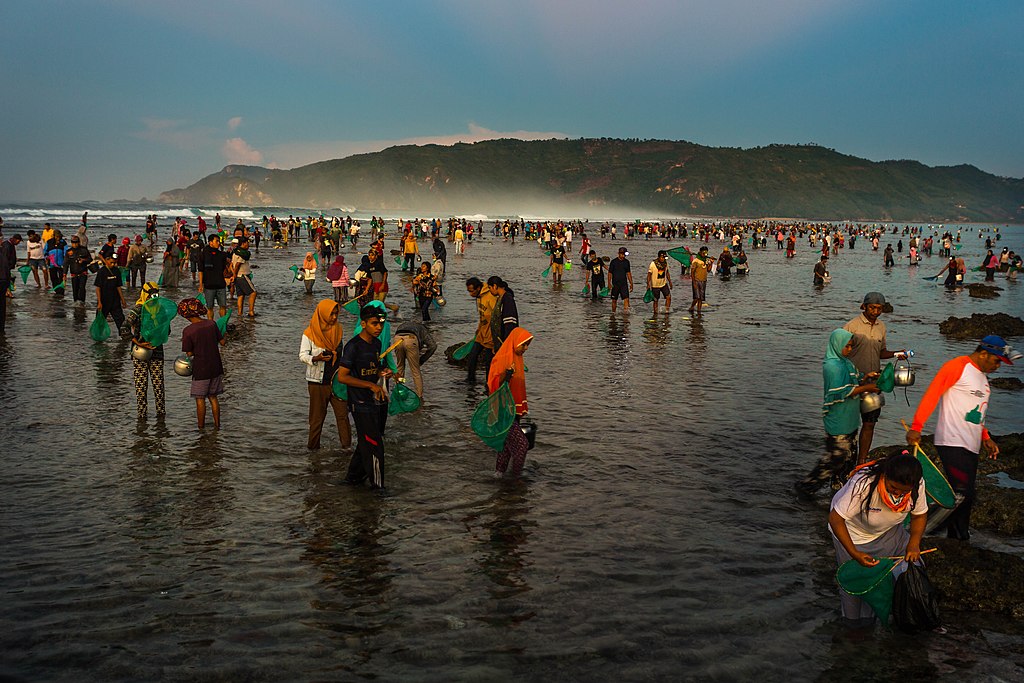 When to travel? February, can vary from year to year.

What is it? The arrival of Nyale (sea worms) once a year to the seashore marks yet another important festivity in Indonesia: the Bau Nyale festival in Lombok. As its name indicates, Bau Nyale (which translates to ‘Catch Nyale’), is a festival where thousands of people gather on the shores of south Lombok to catch these sea worms following a tradition said to have originated in the 16th century.

This tradition has its roots in the local legend of Princess Mandalika, a popular and well-loved princess from Sasak folklore. The legend tells the story of a young royal who was so beautiful and graceful that many princes fought violently for her hand in marriage. In her desire to return peace to the island, she decided to drown herself in the ocean at Seger beach. When her subjects attempted to recover her body, they found instead an abundance of sea worms, thus believing the beautiful princess had reincarnated as nyale.

The Bau Nyale festival is very important for Indonesians as it represents the preservation of an old tradition, one that strengthens unity among locals. Catching Nyale during this event is considered a blessing, bringing prosperity and health. Women also believe eating nyale will make them more beautiful, like pricess Mandalika.

What is it? Conducted every year in August, this truly unique and authentic festival attracts people from all over the world seeking to observe and learn first-hand the diverse traditions of Papuan tribes. Held for the past 25 years, the Dani, Lani and Yali tribes gather to celebrate war and dance, with the mock battles among the tribes being the main highlight.

The tribal warfare that is displayed is more an exhibition of fighting skills and competence, rather than an actual battle with the intention to harm or kill. This simulation takes place for two days, performed by 26 groups of 30 to 50 warriors. Traditional Papuan music called Pikon is played during the war scene, with an instrument that is small in size but complicated to play, and creates a beautiful sound.

Travelers will also witness a large array of Papuan artistic and cultural expressions, including traditional dancing, pig racing, spear throwing competition, earth cooking and more. It is a one-of-a-kind opportunity for visitors to witness different tribes in one place, each taking pride in their individual culture and costumes. Baliem Valley Festival holds a particular attraction for photographers interested in capturing mesmerizing ethnic displays and customs. 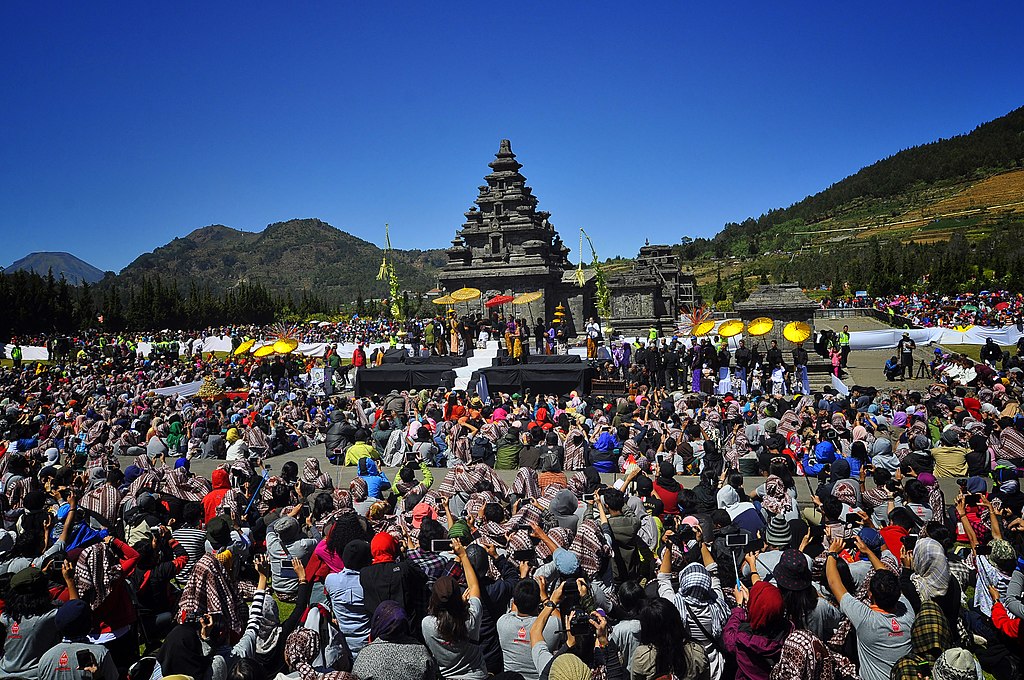 What is it? Known as the Dreadlock Shaving Ceremony, this festival is held every August in the volcanic highlands of the Dieng Plateau. The main highlight of this event is the Dreadlock Shaving ritual known as Ruwatan Anak Gimbal. Some children of the Dieng Plateau mystically develop dreadlocks at a young age, which is then shaved off at a certain age in order to have “normal” hair in the future.

Based on local belief, children with dreadlocks were chosen by their ancestors to accept this gift. While this phenomenon has been subject to scientific investigation, no logical explanation can be found. The decision to trim their hair must come from the children themselves. If parents force their children to do so, it is said the same hair will grow back or a disaster will befall the village. At the end of the ceremony, the trimmed hair will be submerged in the lake, symbolizing the return to its ancestors.

This fascinating event is combined with an art and music festival, including a lantern ceremony, traditional dancing, and Wayang Kulit show (shadow puppet). Tourists will have the opportunity to truly immerse in the culture, heritage and cuisine of the local people, while also enjoying the beautiful nature and panoramic mountain views of the Dieng Plateau.