To visitors of the Peruvian Amazon, the “boto”, or pink river dolphin is a rare and beautiful creature. In South American culture however, it is considered a mythical figure that has been revered and reviled in equal measure. In reality, the pink river dolphin is one of two species of endangered freshwater dolphins that are found in similar locations throughout the Amazon and Orinoco river basins.

Inia geffrensis, or the pink river dolphin is different from the grey or tuxuci (Sotalia fluviatilis) river dolphins, which bear more resemblance to marine dolphins with their bottlenoses and habit of leaping out of the water. As its name suggests, the pink river dolphin is most recognizable by its unique color making it a huge draw for explorers of the Peruvian Amazon. While much of “boto” life and its unique characteristics remain unfathomable, we think you might be surprised by these facts. 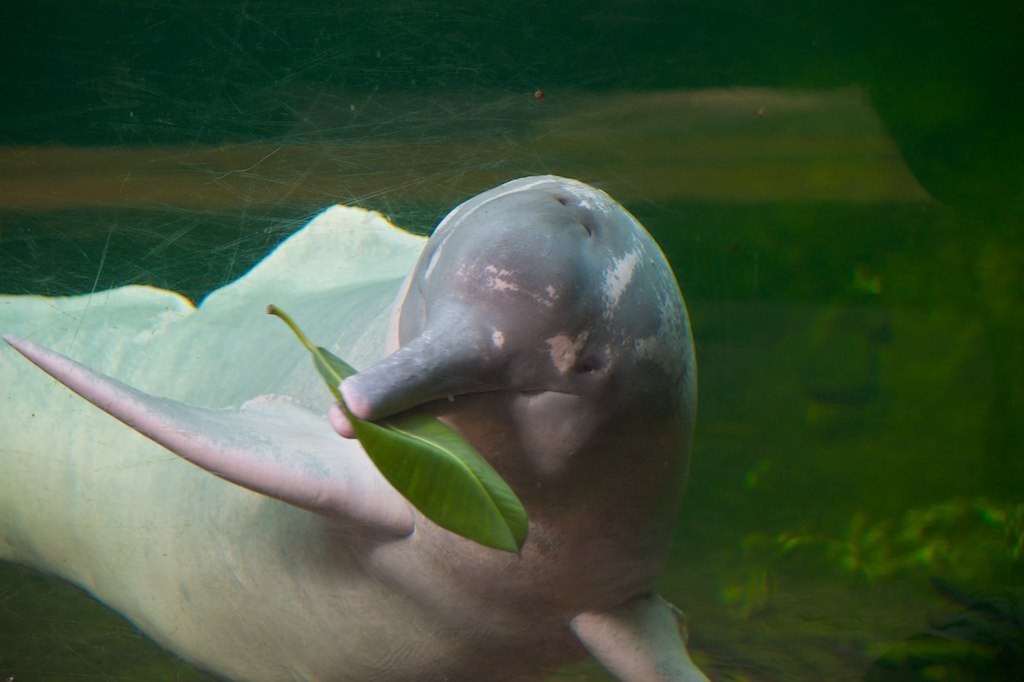 Fact 1. The Amazon pink river dolphin can change its color!

Although Amazon pink river dolphins are famous for its pink hue, they weren’t born this way. The dolphins are actually born gray and slowly turn pink as they age. Male dolphins are strikingly pinker than their female counterparts; the coloration thought to be a product of scar tissue resulting from rough games or fighting over conquests. However, their final color can be influenced by their behavior, capillary placement, diet, and exposure to sunlight; with brighter pinks attracting more attention from the females. These river dolphins can sport markings that range from mostly gray with some pink spots, to full flamingo pink.

Fun fact: when the dolphins get excited, they can flush a brighter pink, similar to humans!

Fact 2. The Amazon pink river dolphin has the largest bodies and brains of any freshwater dolphin

The Amazon pink river dolphin is the largest and smartest out of the five freshwater species. A full-grown dolphin can grow up to 9 feet (2.7 meters) long, weigh up to 400 pounds (181 kilograms), and live to 30 years old. Their diet is the most diverse amongst toothed whales (especially during the wet season), consisting of more than 53 species, including piranhas. They also have unusually large brains, with 40 percent more brain capacity than humans! While they are known to be shy creatures, they are fascinatingly drawn to people, playing curiously with local children, and without demonstrating aggressive behavior. They also communicate using high-frequency sonar clicks to build a three-dimensional echogram of their dark riverine world. 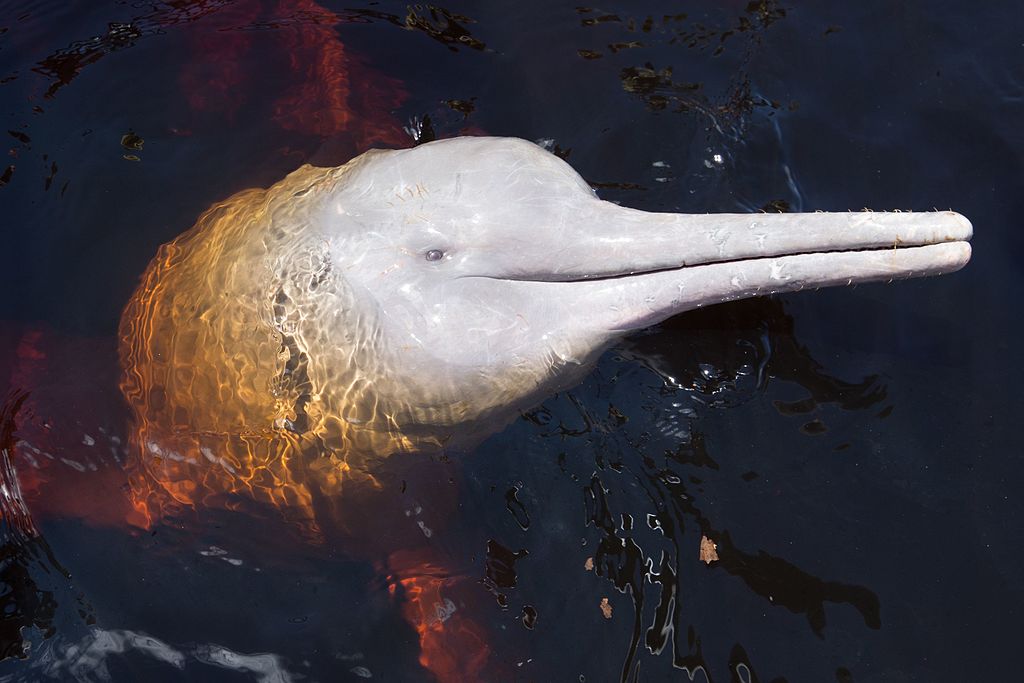 Fact 3. The Amazon pink river dolphin is secretive in nature

It is an enigma as to how many “botos” exist in the Amazon, as the International Union for Conservation of Nature (IUCN) lists them as ‘data deficient’. Part of this status is because while dolphins have a reputation for gathering in groups, the pink river dolphin is often seen alone or in small groups of 2-4 individuals, usually mother and young. One challenge in counting them is that the riverine waters are often murky with silt. Another is that they do not go out of their way to make themselves seen, often putting only the tips of their heads out of the water. They spend a lot of time underwater, and their shy and elusive behavior adds to their mythical quality.

Paradoxically, the good news is that despite living in small groups, Amazon pink river dolphins are incredibly curious and outgoing animals towards humans. They can be frequently spotted playing in the river by our guests during our skiff excursions.

Fact 4. The Amazon pink river dolphin are gymnasts of the water

Pink river dolphins are super agile, as the vertebrae in their necks are unfused, unlike other dolphins. The ability to turn their heads to an angle of 90 degrees allows them to maneuver around tree trunks, rocks, and other obstacles. They can also swim forward with one flipper while paddling backward with the other, letting them turn with more precision. They can often be seen swimming upside down, possibly to help them see the bottom of the river better. Despite their small eyes they have good sight above and underwater and have no trouble navigating the Amazon’s muddy waters to catch their prey thanks to an excellent sense of echolocation. 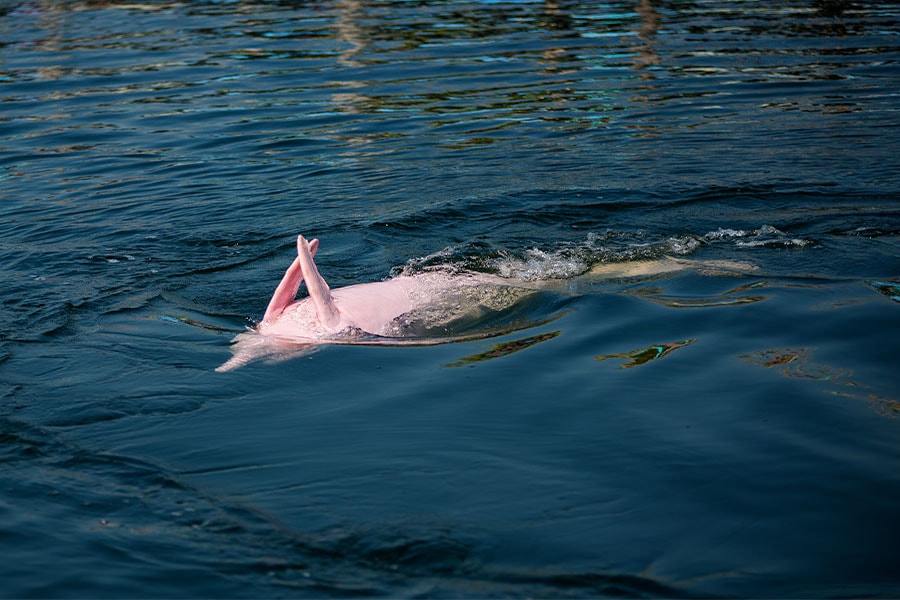 The Amazon pink river dolphin is the subject of many South American folklore, not all benevolent. One such legend claims that the dolphins morph into handsome men known as “boto encantado” to seduce and impregnate womenfolk by night. Another claims that if you go swimming alone, the dolphins may whisk you away to a magical underwater city, which has led to the local fear of going near the water between dusk and dawn, or entering water bodies solo. Some also believe them to be the guardians of the Amazon manatees, so those who wish to see a manatee must first reconcile with the pink dolphin. It is considered bad luck to harm the dolphins, and even worse luck to eat them. In the Peruvian Amazon, the status of the pink river dolphin as a semi-magical being may have helped protect the species by encouraging local communities to treat them well and preserve their numbers. Unfortunately, other threats such as environmental pollution, by-catch, and deliberate killing of dolphins for bait in fisheries still pose a threat. The most recent assessment by the IUCN Red List in 2018 categorizes the species as “endangered” as evidence suggests its total population size has decreased 50% or more over a period of 75 years. That same year, the Peruvian Government approved the ‘National Action Plan for the Conservation of River Dolphins and the Amazonian Manatee’ — a critical step in the conservation of these species integrating scientific research such as ecological and population studies.

If you want to witness these friendly, yet elusive creatures up close in the Peruvian Amazon, knowledgeable guides are a must. We know this for a fact, and that is why our naturalist guides are local born-and-bred, with years of experience on the Amazonian way of life. We dare say some of the dolphins even recognize them! 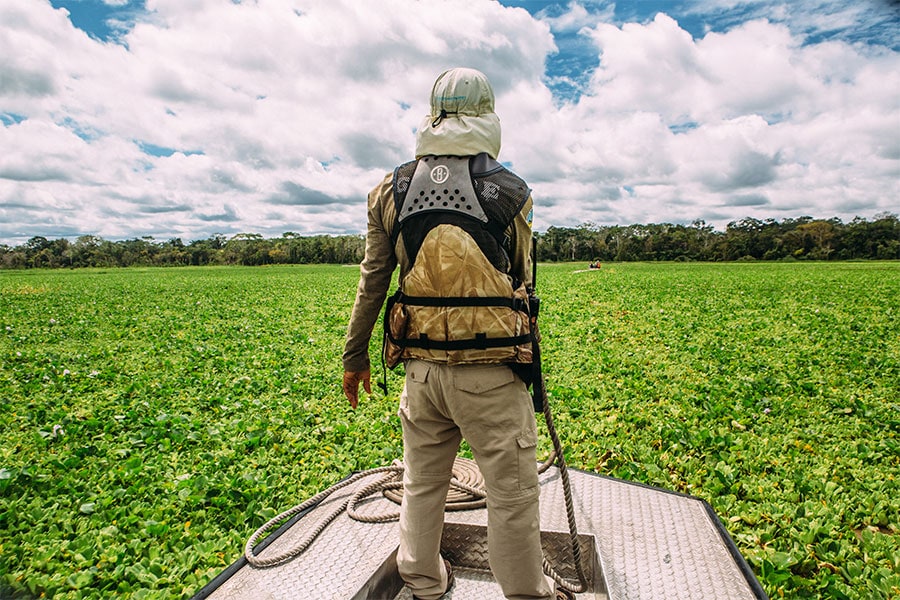 Find out more about our Aria Amazon or brand-new Aqua Nera expeditions in Peru.