Located on the Nazca tectonic plate, the Galapagos Islands owe their existence to volcanic eruptions. They were formed as long as five million years ago through layering and lifting caused by the Galapagos hotspot – a volcanic region in the East Pacific Ocean.

Many islands in the Galapagos archipelago have a distinct conical shape. For example, Daphne Major and Daphne Minor can both be identified from afar given their tuff craters. Isabela Island – the largest in the archipelago – is made up of six shield volcanoes, five of which are still active.

In total, there are 21 volcanoes spread across the islands, with over fifty eruptions in the last 200 years. These eruptions continually change the landscape of Galapagos and contribute to the formation of the islands. As one of the most volcanically active regions in the world, the Galapagos archipelago has been significant, not only for evolutionary research, but geological discoveries as well.

Here are some of the most notable volcanoes to spot on your voyage aboard Aqua Mare, along with their most recent eruptions. 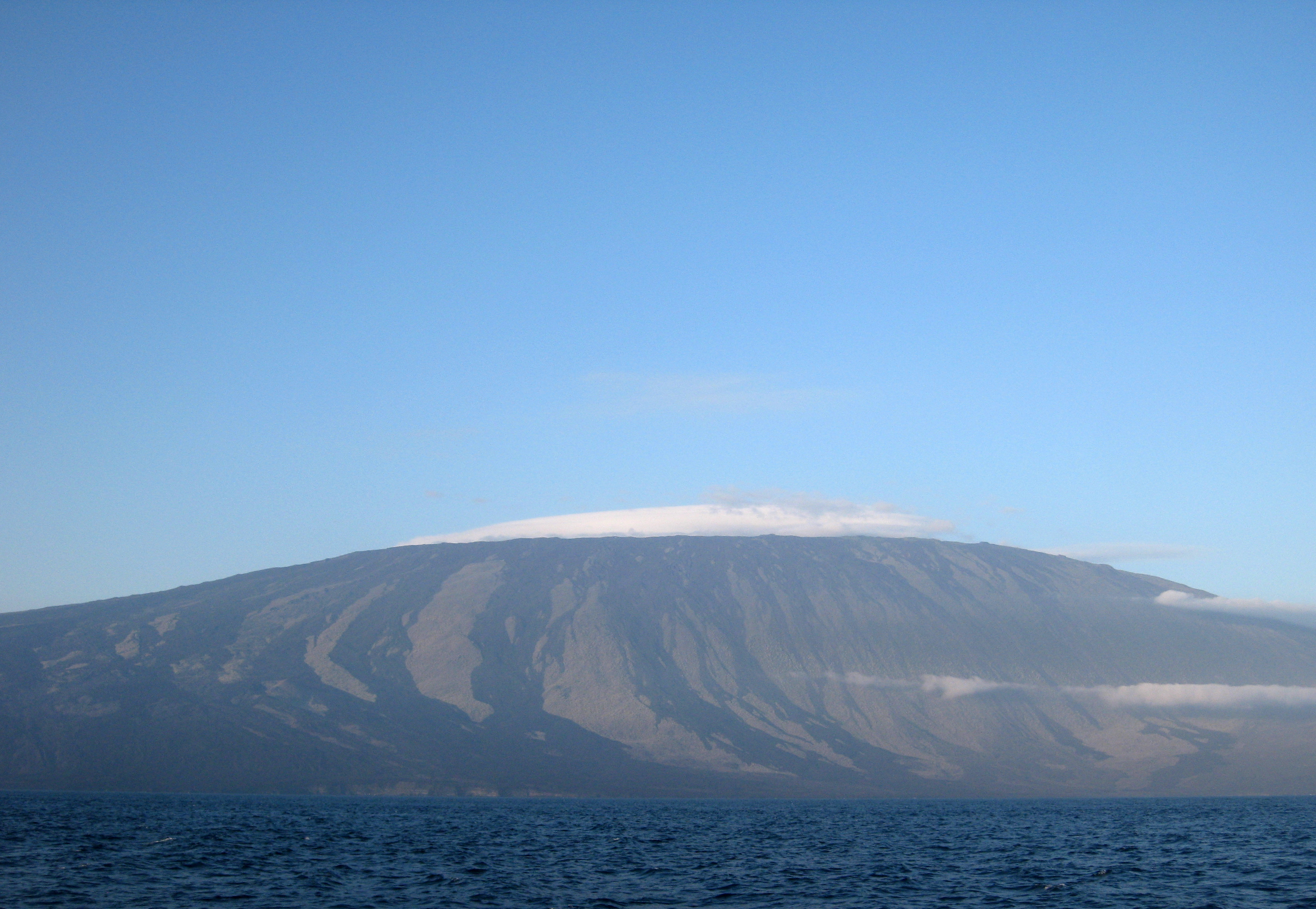 Towering at over 5,600 feet, Wolf Volcano is the tallest peak in the Galapagos Islands. Situated at the northern end of Isabela Island, the volcano was named after German naturalist Theodor Wolf, who spent a significant part of the late nineteenth century studying the archipelago.

Wolf Volcano’s most recent eruption was in January 2022. In fact, the eruption is still ongoing as of October – a whole nine months later! That being said, Wolf Volcano’s eruption – much like others in the Galapagos Islands – hasn’t been overly violent. Back in January, there were even people present on Isabela Island to witness it in person.

“There was a huge orange light,” videographer Joshua Vela-Fonseca told New York Times. “It was very, very difficult to miss.” Visiting for a scientific expedition, Vela-Fonseca didn’t find the experience scary. “[Volcanic eruptions in Galapagos] are very, very gentle, and they last for a long time. It’s just mesmerizing to see.” Responsible for the formation of its namesake island, Santiago volcano had relatively flat summits which allowed lava to flow for large distances and cool down into land mass. Today, Santiago Island has an area of over 200 square miles and the lava flows found on the island date back up to 750,000 years.

Those sailing on Aqua Mare’s East Galapagos itinerary will have the chance to visit Sullivan Bay – a famous visitor site on Santiago Island, known for its Pahoehoe lava flows. The word ‘Pahoehoe’ means ‘easy to walk’ in Polynesian, referring to the smooth texture of the solidified lava. These lava flows are very rarely found across the globe, and the ones on Santiago formed quite recently – from a geological perspective – in the late 19th century.

If you’re sailing through West Galapagos, there’s no need to fret! You’ll have a chance to gaze at the Santiago Volcano from the black sand beaches of Puerto Egas. It’s the perfect place to get a once-in-a-lifetime photo, with a sea lion on one side (if you’re lucky), the ocean on the other, and a volcano in the backdrop.

La Cumbre is the youngest volcano in the Galapagos archipelago, and as you might imagine, one of the most active ones too! In the 21st century alone, La Cumbre has erupted thrice, most recently in 2020. Since the 1800s, it has erupted thirty times, often after seismic events – which are quite common in the region.

The volcano is located on Fernandina Island, the third largest in the archipelago. Due to constant eruptions, the island is mostly barren. However, it is still frequented by birds such as Galapagos penguins, hawks, and flightless cormorants. Colonies of marine iguanas can also be found sunbathing on the volcanic rocks.

Those sailing through west Galapagos will have the opportunity to snorkel alongside these happening shores, spotting marine life and admiring the unique landscape. Alongside Wolf, Cerro Azul is one of the six volcanoes found on Isabela Island. It has recorded eruptions (often multiple times) in every decade over the past century, apart from the 1980s. Most recently, Cerro Azul erupted in 2008 in an event which lasted a little over two weeks.

This eruption wasn’t a threat to the endemic wildlife, and the resident Cerro Azul tortoises were left unaffected. This isn’t always the case though. When the Cerro Azul volcano erupted in 1998, Galapagos National Park authorities had to relocate the tortoise using helicopters.

Aqua Mare guests sailing through East Galapagos will have the opportunity to discover the rich basaltic lava flows which have emerged from this volcano over the course of centuries. These landscapes are accompanied by mangrove lagoons – an example of the contrasting features found only in the Galapagos Islands. Much like its companions on Isabela Island, Sierra Negra is also on the list of most active volcanoes in the archipelago. It remains uncertain when the volcano was formed as its surface is covered with young lava flows from recent eruptions.

In 2018, Sierra Negra accompanied La Cumbre in its eruption, with lava flows traveling as far as four miles from the vents. Prior to that, the volcano erupted in 2005, with a grand total of 6 eruptions in the last 70 years.

All this talk of eruptions might make you wonder if it’s dangerous to visit the Galapagos Islands. In reality, the risk posed by volcanoes is minimal. Scientists were able to predict the La Cumbre and Sierra Negra eruptions five months in advance.

The majority of Isabela Island’s (human) inhabitants – over 2,000 people – live on the shore of Sierra Negra. The authorities are well prepared to evacuate both people and animals. Since these events are so common, eruptions only lead to their respective islands being closed off for tourists. The rest of the archipelago remains open for adventure!

Learn more about the Galapagos Islands while you sail on Aqua Mare and embark on fascinating excursions with our naturalist guides.