On the Aqua Nera, our partnership with chef Pedro Miguel Schiaffino continues. Expect sumptuous and refined Peruvian cuisine orchestrated with native Amazonian ingredients that impart a multi-sensory dimension to your journey unlike any other cruise. 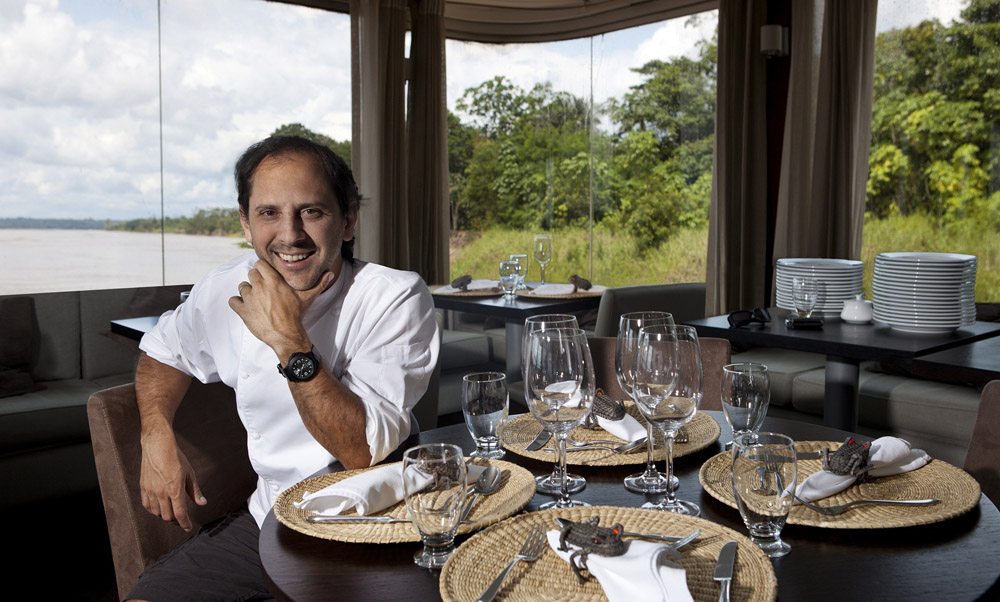 A born and bred Peruvian, chef Pedro Miguel Schiaffino is known for being one of the first culinarians in his country to put local cuisine on the international map by bringing out the best of Peru’s regional flavors. Since 2007, he has partnered with Aqua Expeditions as Consulting Chef on board the Aria Amazon, overseeing the onboard menu and dining experience.

Since 2001, chef Schiaffino has been studying the food and cooking traditions of Amazonia, working beyond the kitchen with anthropologists and environmental scientists. Calling the rainforest his “natural habitat”, chef Schiaffino has cultivated a knack for skillfully incorporating sustainable produce and ingredients from the Peruvian Amazon into this cuisine. In fact, 70% of all ingredients used in chef Pedro’s dishes on board the Aria Amazon are sourced here.

“When I hear from friends in Iquitos or villagers along the river about an unfamiliar dish or ingredient, I would start asking questions. Starting in Lima, I speak to anthropologists and other experts. Then I’ll go to the Amazon, sometimes heading off on a speedboat for eight hours or more in search of ingredients to taste and experiment. It’s amazing how the Amazon constantly offers up tastes and flavors I’ve never imagined before.” — Chef Pedro Miguel Schiaffino

With his dedication to the craft, chef Schiaffino has earned global recognition, including from The Diners Club World’s 50 Best Restaurants Academy for his innovative Amazonia-influenced cuisine at MALABAR and Amaz, two of his restaurants in Lima. On the Aria Amazon, chef Schiaffino’s regularly changing menus tap on the freshest produce available on Aria Amazon’s sailings, including sustainable line-caught paiche.

In 2006, the Government of Peru honored chef Schiaffino with the “Manka” for his contributions to the development of Peruvian cuisine. The creativity of his restaurant MALABAR was highlighted in 2009 by Food & Wine magazine as one of the twenty most interesting culinary experiences on the planet, and in 2010 his Bar was elected one of the 10 best in the world by the same publication. That same year, La Academia Internacional de Gastronomía recognized his work with the Chef L’Avenir Award.

< Back
Amenities
Begin your journey with us
Check Dates and Rates