Santa Cruz is the Galapagos Islands’ main tourism hub and second largest island located at the heart of the Archipelago. On the south coast of this dormant volcano lies Puerto Ayora, a charming city where the region’s endemic flora and fauna thrive alongside the hustle and bustle of everyday life.

As you meander through the streets, browsing at boutique shops and quaint cafes, it is common to spot sea lions lounging on roadside benches and nosing around market stalls. This endearing spot is the starting point of Aqua Expeditions’  West Galapagos itinerary and penultimate stop of its East Galapagos itinerary. One of the highlights of Santa Cruz Island is Los Gemelos — two massive sinkholes that measure approximately 1.6 kilometers in diameter and 280 meters in depth. When the island was still an active volcano, lava flowed freely from the highlands down to its coastline. As the lava moved, the top layer cooled and solidified while the lava under this layer remained hot and continued to flow. The result is a hollow magma chamber topped with a fragile lava surface. Due to erosion and movement in the earth’s tectonic plates, the roof of the chamber collapsed creating the unique Los Gemelos which today is a lush, green, natural haven for bird life.

Make sure to keep your eyes peeled and scan the dramatic scenery for Darwin’s finches. Eight out of 13 of Darwin’s finch species can be found nesting in the surrounding Scalesia forest as well as brightly hued vermilion flycatchers, and short-eared owls.

The Caleta Tortuga Negra is a pristine mangrove estuary brimming with aquatic wildlife. This ecological gem is a must see when visiting the Galapagos Islands. Only navigable by tender, the cove is best experienced alongside native expert guides who’s local expertise is crucial as you drift across the cove’s tranquil waters.

Beneath the surface visitors have the rare opportunity to spot the green sea turtles who lend the estuary its name — an endangered species that mate in the area early in the year. Although a female sea turtle will lay up to 200 eggs at a time, only a tiny fraction will reach adulthood.

Turtles are not the only inhabitants of these blue waters. Travelers can also observe schools of glistening golden stingray, several breeds of shark including hammerhead and reef sharks, pelicans, and boobies. On the northwest coast of Santa Cruz Island, in the midst of desert-like planes and arid forests, rises a rugged hill known as Cerro Dragon. This rocky spire is so named due its thriving population of land iguana, however, this was not always the case. Pre-1990, these endemic reptile species came under threat by feral dogs who were fond of digging up iguana nests and feeding on their young. Fortunately, in 1990, the Charles Darwin Foundation intervened with the help of the Galapagos National Park to remove iguana predators. Now, the population is once again booming and can be observed in large numbers basking on the sun-scorched boulders of Dragon Hill. In 1964 the Charles Darwin Research Station (CDRS), operated by the Charles Darwin Foundation, was established on Santa Cruz. A mere 10 minute walk from the center of Puerto Ayora, CDRS conducts ongoing research, conservation initiatives, and educational programs to protect the fragile ecosystems of this biodiverse region. Its facilities include offices, labs for marine and terrestrial investigation, conference halls, and natural history collection. Attached to this site is the Fausto Llerena Breeding Center. Here, scientists breed various species of endemic tortoises including the Galapagos Giant Tortoise which can weigh up to a whopping 300kg. The program first began in 1965 when only 14 giant tortoise individuals remained on Espanola Island. By 2008, more than 4,000 young tortoises from eight different islands were successfully bred and returned to their original habitats. If you are exploring the Galapagos Islands from Aqua Expeditions’ superyacht, Aqua Mare, our expert naturalist guides will lead you through these grounds. You’ll have the unique opportunity to observe these gentle giants in their habitat at varying stages of their life cycle — from hatchlings, to juveniles, and finally, full-grown tortoises.

For those exploring the Galapagos with Aqua Expeditions on board the Aqua Mare, Santa Cruz is visited on both the East and West Galapagos Itineraries. After a thrilling day discovering the highlands, coastlines, and endemic flora and fauna, guests will return to the 50-meter superyacht for refreshments and a scenic sunset as we head for our next destination. 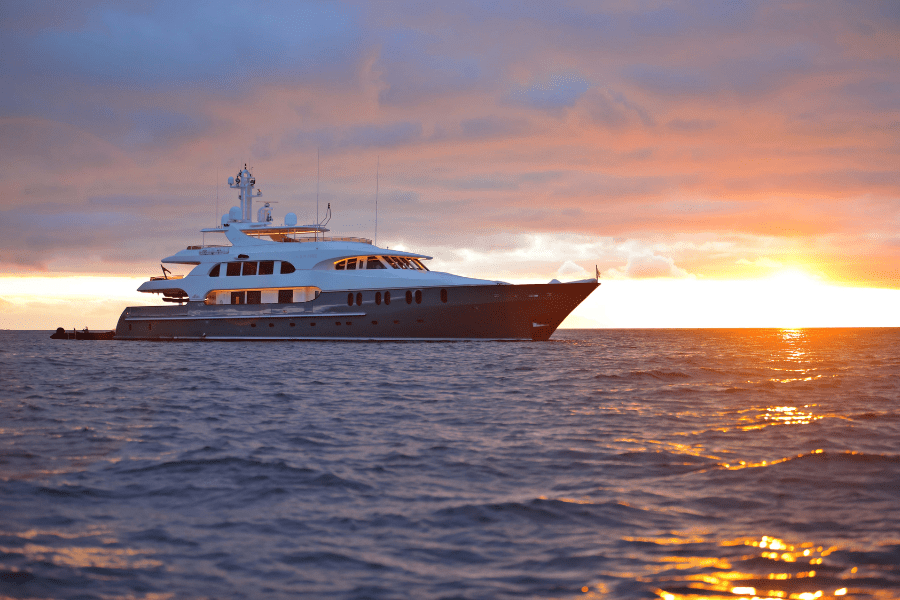 On the west itinerary, guests voyage on to Floreana Island for a morning wet landing excursion to Cormorant Point — a site that boasts two contracting beaches, the first with green olivine crystal sand, and the second with powder-fine white coral sand. Later on in the day, guests can snorkel in a volcanic crater known as the Devil’s Crown. This rocky crown-like structure is home to vibrant coral reefs, playful sea lions, king angelfish, tiger snake eels, eagle rays, hammerhead sharks, and a wealth of other aquatic creatures.